Cardano vs. Polkadot vs. Ethereum, Which Project Will Emerge The Winner?

2021 will prove a pivotal year for Cardano, Polkadot, and Ethereum. While each has its merits, competition between the trio starts to heat up as we head into mid-year.

Alonzo is on track for an August release, bringing smart contracts to Cardano. Polkadot is racing to finish para chain rollouts to enable on-chain governance. At the same time, Ethereum is working on Proof-of-Stake, with its proposed sharding scaling solution scheduled to arrive sometime next year. But which project has the mass-market appeal to come out in top?

Is it a Zero-Sum Game?

Cryptocurrency is a fickle affair. A look back at the top ten from December 2013 shows a list of predominantly unfamiliar tokens. In eight years, seven out of the ten have dropped into obscurity, substantiating the statement that most cryptocurrencies, even top ten heavy hitters, will fade away over time.

When it comes to which smart contract platform will get to stick around, IOG CEO Charles Hoskinson remains philosophical, saying, who knows? He added that this is a question for the market to decide. And in any case, it isn’t necessarily a zero-sum game.

Having said that, he prefers to broach the topic from a different angle. Instead of looking at which platform will win, Hoskinson focuses on actively working towards solving problems. In that sense, Hoskinson believes success is about making a difference, especially in developing countries.

Cardano has a significant presence in Africa, which is a major differentiator between it and the competition. Speaking on the problems in Africa, Hoskinson said:

“[people in the developing world] are shafted because their systems are terrible. They live in capital controls, and corrupt governments and they live in areas where there’s not good rule of law. And they don’t have stable currencies, and as a consequence no real good banking infrastructure, no good risk management infrastructure, and so forth, so they can’t build wealth.”

Sharing his motivation to keep plugging away, Hoskinson said he doesn’t care if that infrastructure runs on Polkadot or Ethereum, or even Bitcoin. But he created Cardano because no one else was addressing wealth inequality on a global scale.

Data analytics firm CryptoDiffer released figures yesterday showing the state of staking. Almost $153.5 billion is staked across all platforms, with Cardano and Polkadot being the most prominent with $28.95 billion and $25.43 billion staked.

Meanwhile, just $8.6 billion is staked on Ethereum, accounting for 3% of its supply. This is likely because staking, in its current guise, requires users to lock up their Ether for an indefinite period. Developers expect withdrawals available around Phase 2 of ETH 2.0, which could be two years away. 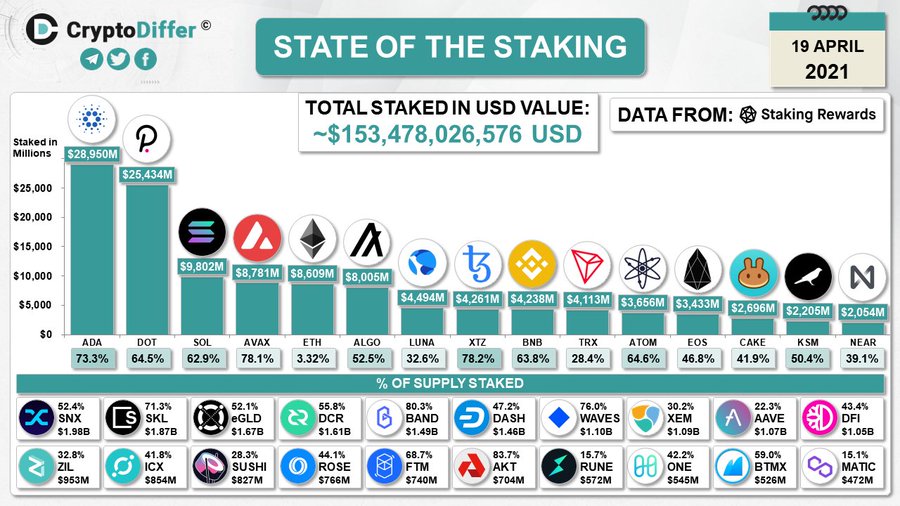 Nonetheless, as a barometer of which platform has the public’s support, Cardano nudges just ahead of Polkadot.