Has The NFT Bubble Popped? Prices Down 65% While Ecologists Sharpen Knives

The NFT space has had a record-breaking first quarter with a multitude of high-profile sales. Most notable was Beeple’s The First 5000 Days, which sold for an eye-watering $69.3mn on March 11. It was the culmination of near 14 years of daily artwork around the theme of societal contradictions in the technology age.

As the third most expensive artwork by a living artist, the scene was set for other NFT artists to follow what Beeple had achieved. To date, none have come close. But that didn’t stop the frenzy of artists and flat-out “minters” from trying to ride the NFT wave.

The primary controversy surrounding art NFTs can be distilled into a single question, are they worth the cost? Based on data from Nonfungible.com, the answer is no. Or in the least, that the market is waking up with a hangover from what has been a wild first quarter.

Nonfungible.com plotted the weekly average price of all NFTs from October 2020 to the end of March 2021. The figures show a peak price of just under $4k in mid-February. A sharp decline followed as the quarter closed out, ending with an average price of $1.4k – a 65% drop.

The tight date range puts this data as statistically insignificant. But it’s interesting to note that while volume also took a tumble some three weeks after the peak price, the volume pattern prints a series of higher lows. This would suggest interest in NFTs hasn’t gone away. 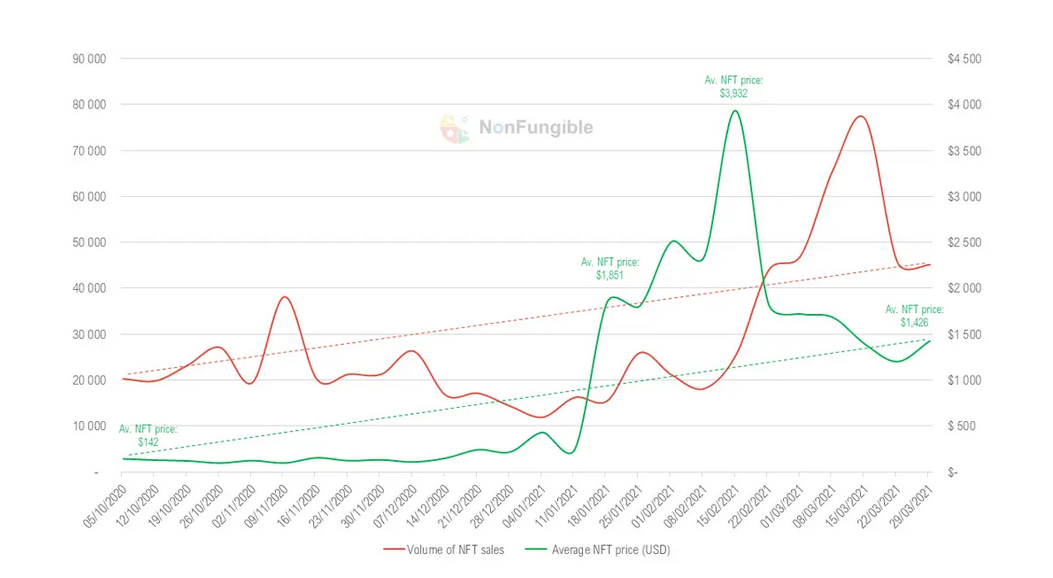 Nonfungible.com dismisses the average price drop as simply stabilization following an unusually buoyant quarter. They also claim to have predicted the drop, saying it is reassuring that a sense of normalcy had returned to the market.

“Can this be considered a price crash and the start of the market correction? Not exactly, the trend seems more to show a stabilization on a high plateau following a speculative peak.”

They concluded that, despite the price dip, NFTs still have a bright future ahead.

Anyone familiar with Bitcoin is aware of the environmental argument against proof-of-work (PoW) networks. It goes something along the lines of PoW is ecologically damaging from a carbon emissions standpoint and a waste of electricity.

Bitcoin catches much of the ecological flak. Perhaps justifiably due to its superior hashing power compared to all other PoW networks. But given the soaring popularity of NFTs, environmentalists are now turning their attention to Ethereum, the platform on which most NFTs get minted and exist.

Chris Precht, an Austrian architect, known for his ecological buildings, was excited when he first came across NFTs. So much so he had planned to mint and sell 300 digital artwork pieces.

However, after learning about the reputed environmental damage he canceled his plans for moral reasons.

“According to an estimate backed up by independent researchers, the creation of an average NFT has a stunning environmental footprint of over 200 kilograms of planet-warming carbon, equivalent to driving 500 miles in a typical American gasoline-powered car.”

Has the NFT bubble popped? Based on limited data, it’s too soon to say. However, with NFTs now catching environmental flak, there’s one more reason for naysayers to object.