OpenOcean – Aggregating the Full Liquidity Across All Cryptocurrency Markets

User experience has been a longstanding problem in cryptocurrency. Early adopters have accepted many issues that just don’t exist in traditional financial markets, including friction with onboarding, slow block confirmation times, and exchange outages.

However, perhaps one of the most significant UX issues for cryptocurrency traders and investors is liquidity. The cryptocurrency markets are heavily fragmented, with each exchange operating as a virtual silo, unconnected to the others. It can even be the case that if you want to trade a particular altcoin, you need to move funds between multiple exchanges simply to access the token you need.

Now, we’re in a new era of adoption, with institutions seeking to gain exposure to the rapidly growing digital asset markets. From an institutional standpoint, liquidity is an even more significant challenge. In a fragmented exchange landscape, the liquidity of a popular trading pair like BTC-USD or ETH-USD is only as deep as the volume on the biggest exchange.

Furthermore, there are often non-negligible price differences between exchanges and no easy way for a trader to be sure that they’re always getting the best price. Trackers services like CoinGecko or CoinMarketCap may provide averages and market overviews. But with the fast pace of movements in the crypto markets, users risk slippage if they’re jumping around between different interfaces and services.

Therefore, with BTC on a seemingly never-ending tear and institutional and retail newcomers flocking to space, there’s never been a better time to fix the liquidity challenge once and for all.

OpenOcean is the only full market aggregator that offers users a single interface to access liquidity across centralized and decentralized exchanges. It uses an intelligent routing algorithm to find the best price for any asset across all exchanges, with the lowest risk of slippage.

The algorithm is an optimized version of Dijkstra’s algorithm designed to find the shortest route between points on a graph. OpenOcean applies its version of the algorithm, called D-star, to find the best prices with lower slippage and then splits routing between different protocols for better transaction rates. The net result for users is the best price with the lowest slippage in real-time during an active trade. 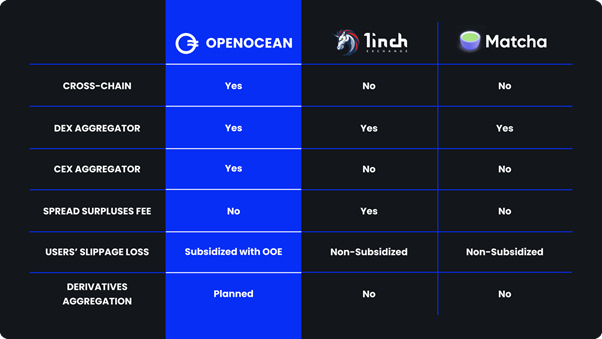 Traders have the option of using either the “Classic” interface, with is a simple box allowing users to access token swaps, or the “Pro” interface, which offers full market visibility across all CEXs and DEXs. Pro traders can also plug into the protocol using the API.

There are no fees for using the protocol. However, institutional investors wishing to take advantage of custom UIs and investment strategy execution are charged for setup.

At the time of writing, OpenOcean has integrated four blockchains: Ethereum, Binance Smart Chain, Ontology, and TRON. Therefore, it aggregates liquidity from all DEXs running on those platforms. It also plans to integrate the Polkadot, Solana, and NEO blockchains.

Binance is the first centralized exchange to become integrated, with plans for Coinbase and Deribit to follow. 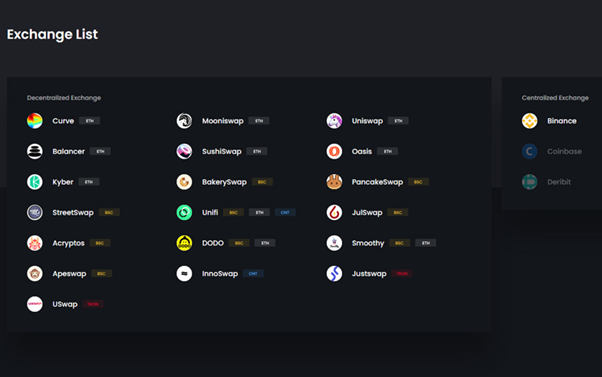 Antarctic Ocean involved aggregating DEXs running on Ethereum, BSC, and Ontology. This phase is already completed. Indian Ocean continued with cross-chain aggregation of swaps, aggregated spot products on CEXs, and the issuance of the OOE governance token. The Indian Ocean completed at the end of March 2021.

The current phase, the Atlantic Ocean, is longer and will run until the end of the first half of 2022. It will bring in multiple updates, including introducing CeFi futures products, aggregating DeFi derivatives, and cross-chain combined margin pools. We can also expect to see more centralized exchanges and blockchain platforms join OpenOcean as the roadmap progresses.

The final phase, Pacific Ocean, will run from July 2022 until 2023. The ultimate goal is to launch OpenOcean as a fully intelligent asset management platform covering the entire spectrum of centralized and decentralized financial solutions.

In early March, OpenOcean completed a strategic fundraising round led by Binance. A few weeks later, the company confirmed that it had made a private placement of shares to a selected group of investors, including Altonomy and LD Capital, both of which participated in the funding round.

The OOE token offers several utilities, in addition to its function as a protocol governance token. In the future, OOE holders will benefit from gas and slippage subsidies, resulting in minimal trading costs. Holding OOE also confers CEX VIP membership, which includes benefits such as fee premiums and reduced trading fees, and token withdrawals.

As OpenOcean delivers on its roadmap milestones of integrating derivatives products, OOE holders will be able to deploy their tokens as margin in combined margin products, enabling one-stop derivatives trading across exchanges. Tokens can also be used as collateral for lending.

The project is currently engaged in an airdrop of 1% of its OOE tokens to early users. 34% of the total OOE supply is allocated to the distribution of liquidity mining rewards over the next five years. OpenOcean will operate pools on DEXs in various public chains it aggregates on the protocol, including Ethereum, Binance Smart Chain, Ontology, and Tron. OOE pools will include pairs with DAI, ETH, USDT, BNB, and others.

OpenOcean was founded by Leo Xue and Cindy Wu. Leo Xue brings experience from Intel and the China Financial Futures Exchange, where he led the team developing the trading system. He started researching cryptocurrency protocols in 2015.

Cindy Wu was formerly a strategy manager at RBS and an M&A manager at the 3M company. She also worked at a private equity fund as a senior investment director. She holds a Masters in Advanced Finance from the IE Business School.

Liquidity in cryptocurrency is a legitimate problem, and OpenOcean is the only aggregator of its kind seeking to pool liquidity from across the entire cryptocurrency markets. Therefore, it has an obvious value proposition that will appeal to cryptocurrency users across the spectrum. If the project delivers on its ambitious roadmap, it will occupy an advantageous position in the market – one that others will undoubtedly attempt to replicate.